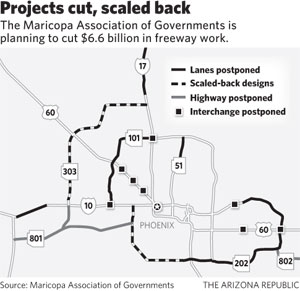 [Source: Sean Holstege, Arizona Republic] — Billions of dollars in voter-approved Valley freeway-expansion work will be postponed and scaled back after plummeting tax revenue forced a regional transportation panel to slash spending Wednesday night.  The Regional Council of the Maricopa Association of Governments voted to cut a $16 billion freeway-improvement program to just $9.4 billion.  The projects are funded by Proposition 400, a countywide measure that created a half-percent sales tax and was passed by voters in 2004.

The South Mountain Freeway, a bypass designed to relieve traffic congestion on Interstate 10, survived the cuts.  But controversy over that extension of Loop 202 took an unexpected turn when Joseph Manuel, the Gila River Indian Community’s representative on the panel, announced that the tribe would be willing to consider a proposal to build it on tribal land.  He abstained from the otherwise unanimous vote to cut funding.

Other proposals to build, widen and make other improvements to Valley freeways will be pushed back until after Prop. 400’s end date of 2025.  Because of the recession, MAG planners are projecting a $6.6 billion shortfall over the next 15 years…

Planners also found opportunities to use money more wisely in central Phoenix.  The Prop. 400 plan originally called for improvements on Interstate 17 between Dunlap Avenue and the Stack interchange with I-10.  Planners are now exploring whether Prop. 400 money would be spent more effectively if a lane were added in each direction as I-17 runs past downtown Phoenix between the airport and the Stack… [Note: Read the full article at Metro Phoenix freeway projects shelved.]

Today (May 7 at 11:59 p.m.) is your last chance to voice ideas for projects that enhance safety and aesthetics along Phoenix's Van Buren Street corridor from 7th St. to 24th St. Opine here: https://buff.ly/31renTR
#downtownvoices in Phoenix, AZ meets Sat., May 8, starting at 9:30 a.m.. Interesting in attending? Send an email to dvc@downtownvoices.org for Zoom info. Agenda here: https://buff.ly/33hOCXf
Downtown Voices Coalition will hold its usual 2nd Saturday of the month community meeting on April 10, 2021 at its usual start time of 9:30 a.m. via Zoom. The agenda is now being finalized. If you aren’t on our distribution list and wish to participate via Zoom, write us at dvc@downtownvoices.org and we’ll send you the link.
Phoenix's Orpheum Theatre through the years: https://buff.ly/3mkwXHg
Attend the Midtown Neighborhood Association Sunday Off Central Block Party on March 14, 10am – 3pm. It's a day of music, shopping, food, fun & community support! Organizers are taking extra measures to ensure your safety & comfort. Get your free ticket: https://buff.ly/2OOjvyP