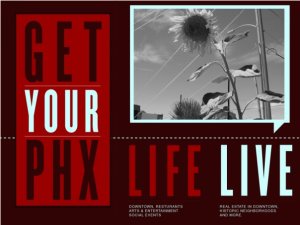 [Source: Arizona Republic MetroMix] — Get Your Phx (pronounced “fix”) may still be in its infancy, only starting up in January 2009, but this celebration of downtown Phoenix’s urban pioneers is evolving as quickly as the city it honors.  It’s a monthly gathering of roughly 40 young politicos and downtown enthusiasts at all the studios, restaurants, and galleries soon to be musts on everyone’s to-visit list, all learning about the foodies, politicians, musicians, restaurateurs, and artists responsible for the rebirth of downtown Phoenix.

Ken Clark, a Phoenix real-estate agent and downtown advocate, is the mastermind behind the parties, which he likens to a “Central Phoenix Booster Club.”  Celebrated businesses in the past have been SideBar, Hanny’s, the Clarendon Hotel and Suites’ Gallo Blanco Cafe, and Monorchid Creative Studios.  “The underlying principle is these are people who are taking a huge risk, and if you have ever taken a risk with a business you know what a challenge that is,” said Clark.  “They are taking a risk on making central Phoenix better, measurably better.”

But these events are not to be confused with your average networking cocktail hour.  Yes there are drinks, and yes they are even catered at times, although donations are welcomed.  And business cards will inevitably be passed around, but building a larger contact list is not the goal.  “This is a relationship based on a shared optimism for downtown,” said Clark.  “Not all of us could build a building, or start a restaurant, but what we can do is celebrate those people who do.  There is so much energy going on for central Phoenix, and people want to be a part of that. It is almost like watching something being born, and you don’t often get to do that.  This (Get Your Phx) provides a way for people to see the birth of this new lifestyle and city.”  [Note: Read the full article at Celebrating downtown Phoenix via Get Your Phx.]