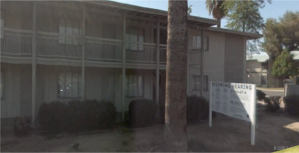 [Source: “Apartment vote delayed,” Kristena Hansen, Arizona Republic] — The saga continues for the redevelopment plan of a shabby apartment complex on Seventh Street in central Phoenix.  The Phoenix City Council this month postponed a vote to give the developer and the residents of nearby historic neighborhoods more time to negotiate.  The final vote has been set for Dec. 3.  “Continuance was in everyone’s best interest,” said Dean Miller, spokesman for Husk Partners, who represents the residents, including those who live in La Hacienda Historic District and North Country Club Drive neighborhoods.

Councilman Tom Simplot, who represents the area, mediated several private meetings between the developer, Country Club Homes LLC, and the residents.  But they were unable to come to an agreement on stipulations in the Planned Unit Development proposal.  Residents agree the current 1950s Country Club Apartments, 3030 N. Seventh St., are an eyesore, but fear the proposed PUD of mixed-use buildings will threaten their quality of life.