Why just eat lunch at noontime? Why not go on a cultural journey guaranteed to open your eyes, expand your mind and stir your spirit? The “Faces of Diversity” Brown Bag Series features dynamic people telling their stories about diversity in our community — race, ethnicity, gender issues, disability awareness, religion, etc. 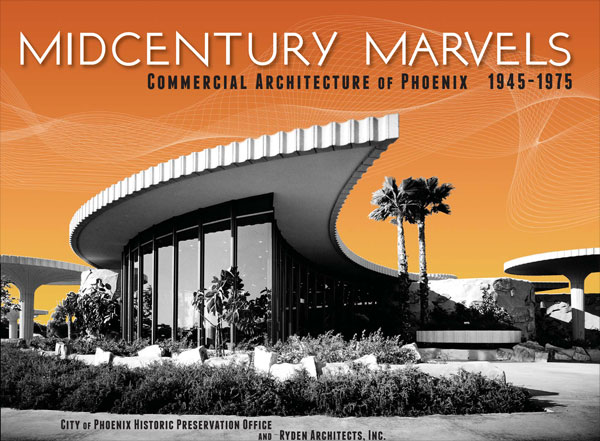 After several years of intensive effort (and with several grants), the City Historic Preservation Office is finally releasing its publication “Midcentury Marvels: Commercial  Architecture of Phoenix: 1945-1975.”   This is a glossy hard-back 250+ page publication with over 300 current and historic photographs telling the story of Phoenix’s post World War II rise and the commercial architectural wonders that sprung up on the Phoenix landscape during this era.   Impeccably researched, Don Ryden’s narrative squarely places our local culture in context with the global and national Modernism movements.

The book will be released for the first time at a Brown Bag Lunch and  Book Signing at 12 noon on Friday Jan. 21. A limited edition of the first printing is available for purchase for $20. First come first serve!

By the end of January 2011, the book will be available for sale online at phoenix.gov/historic where you can purchase it for $20 plus $4.99 shipping.  The book will also be available for sale at the $20 price at the Historic Preservation Office during regular business hours, 3rd floor, Phoenix City Hall starting January 24, 2011. All proceeds from the book sales will go to the Historic Preservation Bond Fund.

The traditional styles that characterized Phoenix architecture during the early 20th century gave way to a bold new design aesthetic known as Modernism. Many of Phoenix’s most recognized buildings were constructed during this era. Don W. Ryden, AIA, and Barbara Stocklin will tell the story of the remarkable post-World War II era in Phoenix history and discuss the importance of preserving historical buildings that still remain.

This series, sponsored by the Phoenix Human Relations Commission and the city’s Equal Opportunity Department, promotes the value of cultural diversity and creates opportunities for positive exchange among diverse groups. For more information, visit phoenix.gov/EOD/bbag.html.

Park at 305 W. Washington and bring your ticket for validation and parking discount. The Light Rail stop is just steps away!

We hope to see you there with all the other Usual Suspects who are fighting hard on behalf of our city’s midcentury heritage!