Next weekend, Valley residents will take to the streets to learn about art and architecture in their community, and honor Jane Jacobs.

Jane’s Walk is a series of free neighborhood walking tours that takes place around the world on the first weekend of May to coincide with Jacobs’ birthday, May 4, 1916.

Former Phoenix resident Yuri Artibise, who relocated to Canada this month, helped organize Jane’s Walks the past few years. Artibise said Jacobs was an activist who championed the interests and knowledge of residents over a centralized approach to city building.

Christina Plante and Ed Lebow are guiding the walk in Sunnyslope on May 7.

Plante, who lives and works in Sunnyslope, and Lebow, Phoenix’s public art director, will offer a personal take on the history and planning of public art in north central Phoenix.

Besides offering a look at public art along Dunlap and Central avenues, the walk will provide a lesson on the history of city-financed public art.

“The canal project came out of a long, long effort,” Lebow said. “The Junior League of Phoenix wanted to show how the canal banks could be better public space for the public. It took a lot of planning for Sunnyslope residents to accomplish that.”

The Calle 16 Jane’s Walk will feature an up-and-coming arts and culture district on 16th Street, focusing on the Hispanic population of the surrounding neighborhoods.

The Mesa Jane’s Walk will highlight downtown and historic Mesa.

Three walks will take place May 7 and 8th: 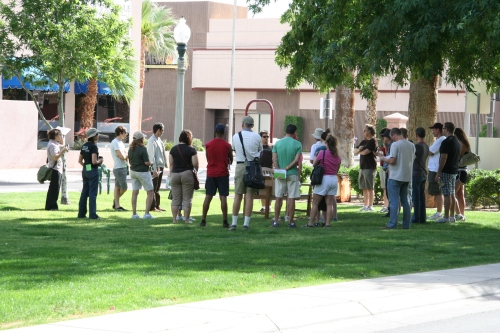 [Source: Yuri Artibise] — The inaugural Jane’s Walk Phoenix was a huge success.  Over thrity people took advantage of the nice weather to come out and celebrate Jane Jacobs and learn more about the neighborhoods of downtown phoenix.  The initimate size of the group allowed people to meet one another and share stories, history, and gossip about the streets, parks, and buildings that we passed during the walk.

Special thanks goes to Catrina Knoebl, Greg Esser, and Kimber Lanning for sharing their knowledge and insights along the route, as well as all the particpants for their great questions and observations.  As I’ve said from the beginning, it’s the participants who are the true guides of the walk.  Special thanks also to Jack London, Nick Bastien (Rail Life), and David Bickford (PHXRailFood) for taking photos along the way.   [Note: To read the full recap, click here.]

While this area in mind, walk organizers would appreciate your responses to as many of the questions below as you like (five would be great)!   Your answers will help in selecting a specific walk route and identifying features and concepts to point out during the course of the walk.  For this survey, “neighborhood” refers to the northern part of downtown as explained above.

In addition, with your permission, organizers would like to profile some respondent’s answers in the Jane’s Walk Phoenix Blog.  However, if you would rather your answers to be anonymous or confidential, that’s no problem!).  Just cut and paste your responses into an e-mail to janeswalkphx@gmail.com

Participate in Jane’s Walk in downtown Phoenix, May 2

[Source: Yuri Artibise] — Downtown Phoenix will be home to Phoenix’s inaugural Jane’s Walk on May 2, 2009.  The walk will take place between 10 am and noon on May 2, 2009.  It will start and end at Portland Park at N 1st Ave. and W. Portland St. (next to the Roosevelt light rail station).  This free walking tour is part of an annual event to commemorate the birthday of renown urban activist Jane Jacobs who died in 2006.  Jane’s Walk is a “street-level celebration” of Jacobs’ legacy and ideas that combines the simple act of walking with personal observations, urban history, and local lore as a means of knitting people together into strong and resourceful communities through bottom-up approaches and neighborhood involvement.

Jane Jacobs was an urbanist and activist whose writings championed a fresh, community-based approach to city building.  She had no formal training as a planner, yet wrote what many consider to be the ‘bible’ of urban planning.  Her 1961 treatise, The Death and Life of Great American Cities, introduced groundbreaking ideas about how cities function, evolve and fail that are now common sense to generations of architects, planners, politicians, and activists.  Jacobs was a champion the interests and knowledge of local residents and pedestrians over a centralized, car-centered approach to planning.  She also promoted the refurbishing old buildings instead of tearing them down and building new ones, and demonstrated the desirability of increasing the density of cities instead of sprawling endlessly outward.

Cities across the U.S., Canada, and India will host Jane’s Walks on the first weekend in May.  This is the third consecutive year for Jane’ Walks in North America.  So far, Jane’s Walks have occurred in Toronto and New York in 2007 and in Ottawa, Calgary, Winnipeg, Vancouver and Salt Lake City in 2008.  This year, the walks have exploded to 41 cities, including 2 in India.  Several cities are host to multiple walks.

You don’t have to be familiar with Jane Jacobs’ work to participate.  The walks are meant to be fun and participatory–everyone’s got a story and they’re usually keen to share it.  Whether you’re a local activist, resident, business owner, politician, preservationist or a simply a citizen who loves your community, participating in Jane’s Walk Phoenix is a great way to celebrate the reemergence of downtown Phoenix as a vital urban hub and honor the legacy of Jane Jacobs.