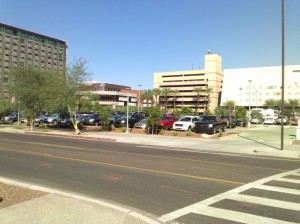 The City of Phoenix has won its case to keep its parking lot on the same block formerly occupied by the Sahara/Ramada Inn.

A court verdict on Monday reaffirmed the city’s decision to build a temporary parking lot adjacent to Taylor Place, rejecting an appeal filed by a downtown Phoenix resident and community activist.

Judge John Rea’s verdict said the decision at the November Board of Adjustment Hearing, at which a five-year permit for the parking lot was issued, was not “arbitrary, capricious, or an abuse of discretion.”

The verdict came over two months after the plaintiff, Sean Sweat, a capital supply engineer for Intel, had his appeal heard before Rea in July. Some downtown Phoenix community members had attempted to stop the construction of the parking lot, which opened in June at the site of the former Ramada Inn, by proposing a dog park.

Read more at The Downtown Devil.