[Source: Andrew Johnson, Arizona Republic] — For years, “hard-money” real-estate lenders have operated in relative obscurity, raising billions of dollars from investors to fund thousands of developments across Arizona.  The inner workings of such financiers, who charge high fees and interest on building projects that banks deem too risky, traditionally have been familiar only to developers and the lenders themselves.  The integral role they play in the Valley’s real-estate market has garnered increased attention as banks have reined in lending activity.

The high-profile case of Mortgages Ltd. also has brought more attention to the industry.  It was thrust into the spotlight with the June 2 suicide of its chairman and chief executive officer, Scott Coles.  Coles’ death occurred amid lawsuits brought by borrowers and just three weeks before a developer forced the company into bankruptcy.  Phoenix-based Mortgages Ltd. was considered Arizona’s largest, oldest and best-known private lender.  But the company is only one of dozens of hard-money lenders in Arizona that specialize in short-term, high-interest loans for real-estate projects.  The firms’ operators say they have seized a bigger piece of the construction-lending market because traditional banks and institutional players are on the sidelines.  Many are still actively soliciting funds from investors, who are vital to their ability to make loans.

But Mortgages Ltd.’s problems have caused some industry experts to question whether hard-money lenders are next in line to be hamstrung by the bad real-estate market.  Their lending and fundraising practices — largely unregulated — also have come under scrutiny in lawsuits by investors and developers.  “Our industry for many years was the Wild West,” said Jayne Hartley, managing director of Phoenix-based private lender Coppercrest Funding LLC.  [Note: To read the full article, click here.]

Phoenix: A city in need of retrofit

[Editor’s Note: The Las Vegas Sun has gone on the road to listen to voters and talk to political leaders around the West.  Reporters are examining the economic, cultural, and demographic forces re-shaping the region as they drive to Denver for the first of the two major party conventions the newspaper will cover.  In this segment, reporter J. Patrick Coolican writes about Phoenix development.  To view the full series, including segments about Arizona’s growing Hispanic population, ASU President Michael Crow’s influence, and prognostications by local attorney Grady Gammage Jr. and former Congressman Jim Kolbe, click here.]

PHOENIX — Fans of urban planning, let me warn you: Phoenix is not for you.  Developers hold great sway.   That, combined with a strong property rights ethos, have created a city that is hard to get around, lacking in walkable amenities, and as Sun photographer Leila Navidi nicely put it, “visually incoherant.”

High-rises exist next to brownstones next to a strip mall.  We stayed downtown Tuesday night, and it was like a ghost town.  Nothing happening.  This certainly is not the only city with this problem.  And clearly the community is trying to get people to go downtown, with light rail about to come online and construction of some higher density projects.  But all-in-all, there’s just no arguing with the fact that the organizing principle of this city, for decades, was the automobile. 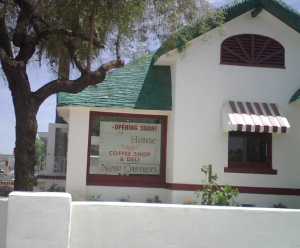 The Willo/Willow House Coffee Chop (149 W. McDowell) name controversy continues.  In this photo taken today, note the white piece of paper plastered over the word “Willo.”  WOW!  WOnder WhO’s dOWn on this?

Newsflash!  The Phoenix New Times reports that the Willow House Coffee Shop (the one over by the state Capitol) has closed.  Click here for details.

[Source: Jahna Berry, Arizona Republic] — For two years, Phoenix has had a taste of downtown college life.  This year, ASU officials say, the city will see the main course.  A new journalism-school building and a 13-story dorm will open their doors for the first time this semester, but the big boost will come from the students themselves.  Unlike many of the campus’ current students who are commuters, graduate students and the like, the new students (as many as 1,500) are more likely to be underclassmen.  In addition to those who will live on campus, many more will hang out downtown.

Business owners have wondered if the taxpayer-funded ASU satellite campus will deliver on its promises to bring foot traffic and a college vibe downtown.  Although the ASU campus has helped the city court prospective downtown developers, few nearby shops have seen throngs of student customers, merchants say.  This year will help change that, said Christopher Callahan, dean of the Walter Cronkite School of Journalism & Mass Communication.  The bulk of the new faces will be enrolled at his school, which moved from Tempe into a new six-story, $71 million building on Central Ave this summer.

Until this year, the student population had risen gradually downtown as ASU colleges there increased enrollment.  When the first ASU schools opened downtown in 2006, enrollment was 2,766.  Last year, enrollment reached 3,377.  [Note: To read the full article, click here.]